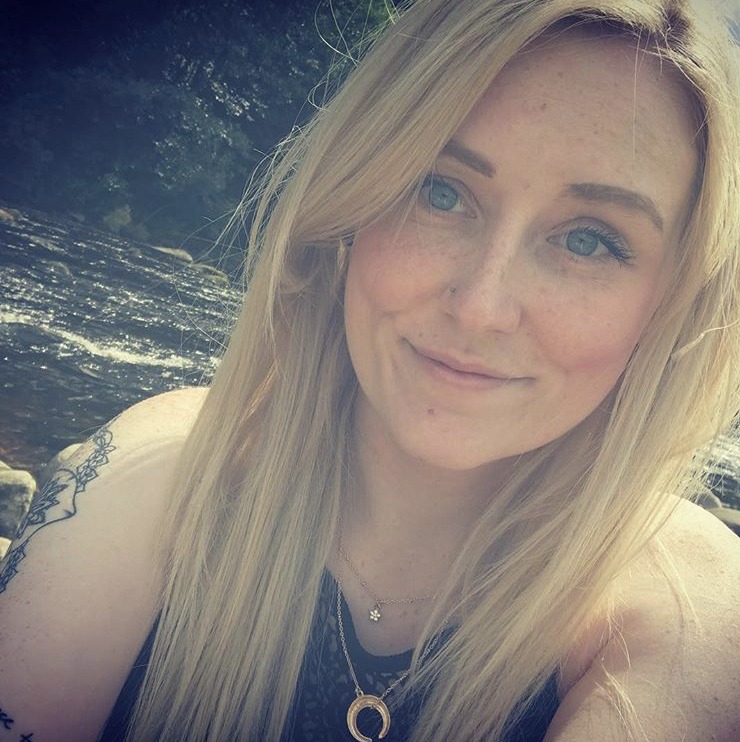 Whoop! Number 5. I love the fact that even though all these people are so different from one another, there are always some consistent points that come up that tie each of them together (mainly reasons for being vegan and some of there storecupboard essentials) – it all reminds me about the lovely sense of community between us all. Anyway, on to this week’s interview – with the lovely Lyndsey.

Lyndsey is a 27 year old mum of 2 from Yorkshire, she’s raising her little boys vegan whilst growing her own food and spending lots of time in nature. She loves painting, being active and is animal mad. You can find her on Instagram at @lynds_wildandfree

It will be one year on the 30th September this year! I’m really excited to celebrate one whole year, I feel amazing since going vegan! I actually went vegan in quite a funny situation. Our friends had been for a bbq and said they’d watched Cowspiracy and were having a meat free month.. so a few days later when me and my partner were eating a roast beef dinner, we were browsing Netflix and I saw Cowspiracy. I laughed and said let’s watch it for a laugh, bet it’s so stupid! We started watching it (whilst eating our beef dinner) and by the end of it I put my fork down and looked at Mark. He looked back at me and said ‘don’t you dare say it’ and I said ‘I’m so sorry. I’m so sorry I’m going vegan.’ That was that! Mark went vegetarian a few days later and a few months after that was fully vegan! We are raising both our children vegan and our youngest has never had animal products at all!

I started out posting my vegan meals to show my friends and family what I was eating and maybe inspire them to try vegan meals. I don’t post my food as often now but that’s a lot down to I don’t get chance to take photos before it’s devoured! I’m hoping to get back into it now my youngest is a bit older. We are also trying to be as whole foods as possible so I’d like to start posting more to show how easy it can be and maybe inspire others!

I’m going to list 5 accounts that truly inspire and change my life daily rather than my friends accounts who I love if that’s okay!

The first one is @vegannkittenn because she is incredible, she inspires me to exercise, lead a healthier life and to get shit done! She also opens my eyes to a lot of stuff and educates me. PLUS she’s so super beautiful and her daughter is the sweetest little thing. She is to me what @andyfrisella is to her!

The second one has to be @theminimalists because alongside veganism I discovered minimalism. In my opinion the two go together hand in hand because being vegan is about being compassionate and making better choices and nourishing your body and minimalism is very very similar! It’s all about living a more meaningful life and this account really inspires me to do that.
The third account would be @matt_cama – he is an absolute beautiful soul. I found him through vegan accounts and he educates me daily on personal growth and understanding your mind. He’s truly changed my life and continues to do so.
The fourth is @barefootfive because the posts are SO relatable. I read them every day and almost always repost them on my stories because they’re so accurate and relevant! If I could I’d have barefootfive quotes all over my house!
The fifth account would have to be @conscious_muscle because first of all he’s incredible but mostly because he inspires me to do better and be better. I have recently started exercising and working on my body and his account keeps me focused AND I could not live without his insta stories when he’s gobbling at his turkeys and chatting to his pigs.

My favourite recipe to make is my own vegan mac n cheese! It’s our naughty meal and we always eat far too much in one sitting. The recipe is super simple, fry onions and garlic in a bit of oil, then add a tin of coconut milk. In another pan cook the macaroni then drain and add to the pan with milk, add some black pepper, bit of salt, some violife cheese slices and LOADS OF NOOCH. Sooooo tasty!

The only vegans are me, my partner and my two children. Going vegan was met with a lot of concern and confusion as people hadn’t heard of it and were concerned about our children’s health. People now accept it and know a lot more about Veganism and it’s benefits and I’m hoping one day my whole family makes the connection with animals and they stop eating them! Ive made some wonderful vegan friends on Instagram which I’m super thankful for, I’m sure we’re the only vegans in our village! Some of the lovely vegan friends are @abbyavocado, @elephants_and_cleaning, @vegan_lucy_york, @our.veganlifestyle and @vegantruckdriver.

Tofu for ears so I could laugh at jokes I hear and say ‘that’s tofunny’ haha.

It has to be my vegan mac n cheese but sadly I don’t have a photo! Then next best thing would have to be the James Aspey pancakes! So simple yet so so delicious!

Go for it! You won’t regret it! If you want to do it for animals then watch a documentary and it will happen instantly for you but if it’s health or environment then switch your non vegan meals one at a time and before you know it you’ll be eating completely Vegan!

A lot of my followers are from when I had a house Instagram and aren’t vegan so I often get asked ‘don’t you miss bacon and cheese?’ I also get a lot of messages from people saying ‘I could never be vegan, I love cheese too much!’. The weirdest question I’ve ever been asked though is by a close friend who said when Mike Wagowski closes his eye is he blinking or winking and honestly it’s haunted me.

YES! I’ve started pole fitness which I want to post more of, I’m attempting to be a lot more whole foods and raw, I’ve started yoga and I’m back into painting. My youngest baby is finally being less attached to me so I’m starting to make a life for myself again so I’m hoping as I come alive so does my insta!

1 thought on “The Instavegan Interviews – Part 5”