“Urgh, not another thing we can’t enjoy. Why can’t you vegans just back off and let us have our harmless fun?”

OK. About the fun police thing. I’ll start by saying, rather aptly for the subject, I’m really not trying to p*ss on anyone’s bonfire. But we’re in the age of the likes of QI telling us that avocados aren’t vegan (eyeroll emoji or do they have a point?). So there’s bound to be other debates that come up and as it’s the time of year for them, I decided to do a bit of research into how much fireworks align or conflict with choosing to live a vegan lifestyle.

So when I was sitting raging because for their 10 minutes of fun I was suffering with an hour of toddler trauma, I thought “I wonder if fireworks are even vegan”. So here I am, ready to investigate. 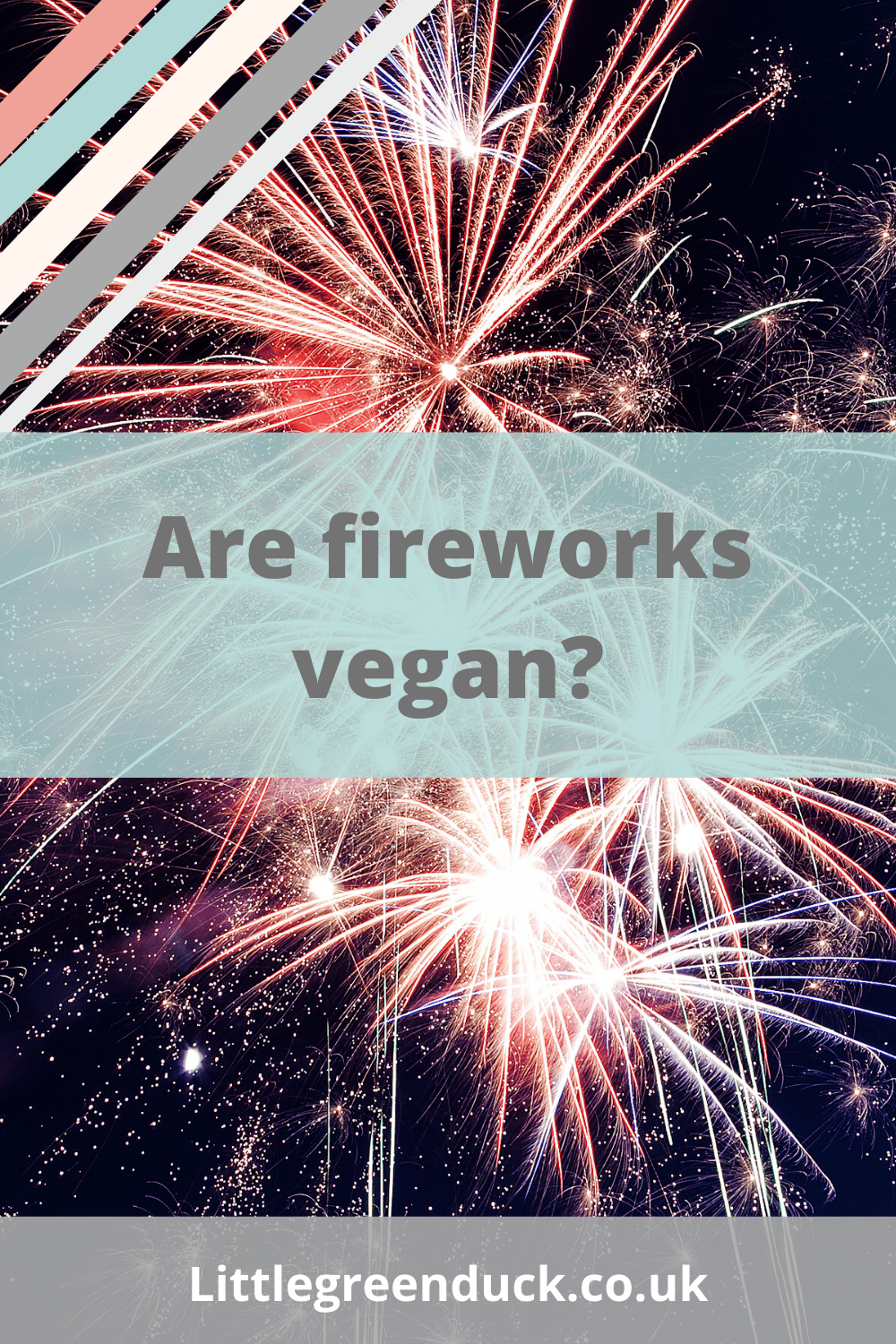 What is the definition of veganism?

According to The Vegan Society veganism is:

“A way of living which seeks to exclude, as far as is possible and practicable, all forms of exploitation of, and cruelty to, animals for food, clothing or any other purpose.”

This prompts a few questions:

Well, this might just stop any kind of debate before we’ve even started. I had no idea! From the research I’ve done, most fireworks do indeed contain an animal product. That product is stearic acid. Stearic acid is a long chain fatty acid that *can* be sourced from plants, but is much more commonly derived from animals. It’s used to coat metal powders, such as iron and aluminium. This prevents oxidation and allows the powders to be stored for longer.

So that’s a pretty definitive answer. A quick Google of the term “vegan friendly fireworks” doesn’t throw up any results for fireworks for sale with non-animal ingredients. This doesn’t surprise me – as given the points to come I’m pretty sure there would be no market for them.

Are fireworks cruel to animals?

Again, another pretty clear-cut answer and this is where my friend Jo comes in. Every year, we exchange angry Facebook chats about how her lovely little dog, Portly (pictured below – LOOK AT HIM!), cowers in fear every time he hears the sounds of a nearby firework display. He’s not the only one – I’m pretty sure there’s not a domestic animal out there that LOVES the sound of what feels like the world ending in their sensitive little ears.

According to the PDSA, there are over 11 million cats and almost 9 million dogs living in households across the UK. Not to mention all the rabbits, guinea pigs, mice, rats, chickens…I could go on. That’s a lot of scared pets. 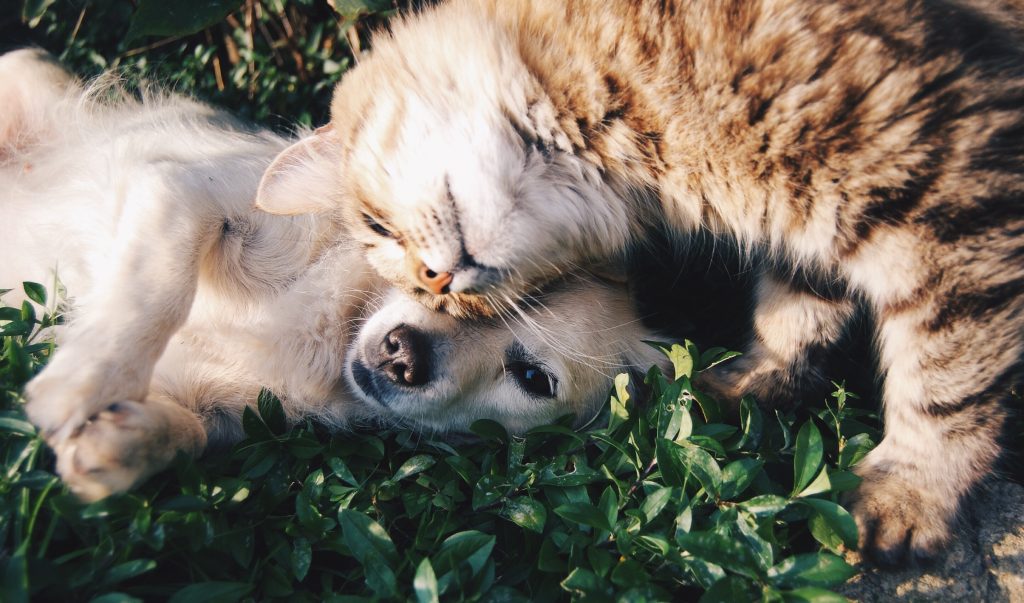 Granted, there are measures we can take to protect our companion animals from the noise and fear of fireworks, and technically it’s “just one night”. The reality is quite different though. In these days of multiple organised displays in every town, and of anyone being able to walk into a shop and buy fireworks to let off at any time of night in their garden, it’s sometimes hard to predict when to keep animals protected. Arguably though, our domestic animals have it good, even if they don’t feel like they do.

The effect of fireworks on wild animals living all across the country can also be devastating. Sometimes these displays are happening right in their, usually safe and quiet habitats. This causes, fear, stress and anxiety at best, and at worst, injury and death. We’ve all heard the advice to check our bonfires for hedgehogs, in case they’d crawled in thinking it would be a nice place to hibernate, but that’s only one risk to wild animals.

This article on Wildlife Articles has some really valid points that, as a pre-vegan consumer of anything and everything without any thought, I’d never really considered:

“Mammals will flee due to the noise caused by the fireworks, often leading deer running across roads putting drivers’ lives at risk, or some mammals may tragically fall into ponds as they scurry to escape and may not able to get out (all the more reason to create a wildlife friendly pond with a sloped area for animals to get back onto land if they should fall in). Birds will take flight from their roosts and may fly into windows, as they too are panicked and confused.”

The rest of the article goes into a lot more detail about the potential harm to wild animals and is well worth a read if it’s a topic you want to know more about.

Anything else, you party pooper?

OK OK, I didn’t realise it was going to be so clear-cut! I’m sad to say though, there’s more. Since turning vegan, my entire world view has changed. Even though my initial reason for the change was for the animals, it’s hard to ignore the environmental benefits of veganism. That’s a whole other post, but it has got me thinking about how bad fireworks are for the environment.

Are they really that bad for the environment?

Firstly, fireworks are made up of a whole host of chemicals, many of which are pretty harmful to humans. They’re absolutely loaded with toxic metals, which are exploded into the atmosphere in tiny particles, all ready to be breathed into our lungs, and the developing lungs of our children. In addition, bonfire smoke contains highly toxic carbon monoxide. 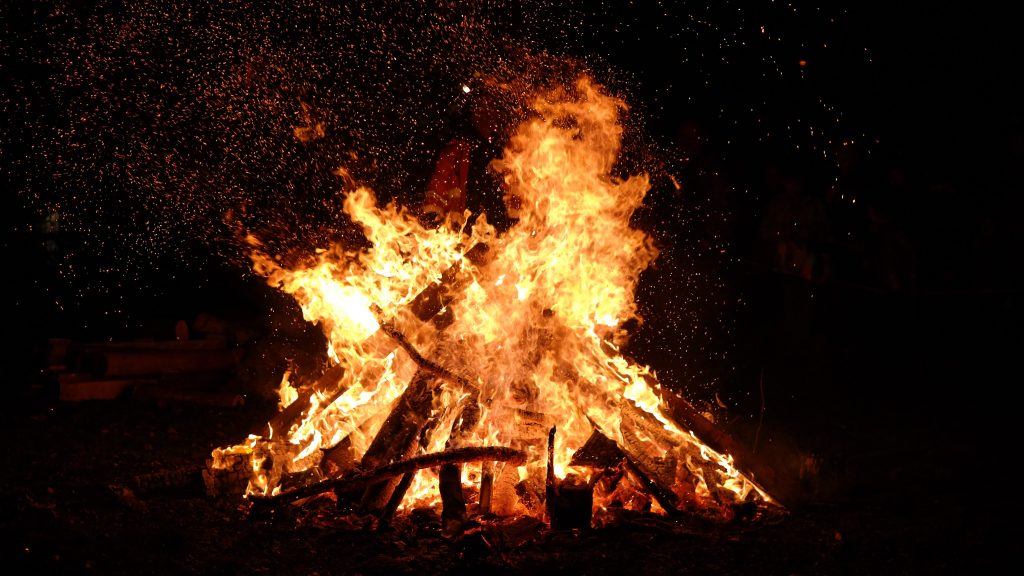 During this 2010 study, researchers tested the quality of the air after Guy Fawkes Night and Diwali, and concluded that in the 24 hours after both events, the levels of harmful particulate matter in the air was significantly higher than regulatory limits. They also found that the particulates associated with fireworks were much more toxic than vehicle derived emissions.

As well as the human issue, there’s the matter of these particulates raining into lakes and rivers all over the country, adding to the potential harm to wildlife.

Well, from my point of view, the conclusion is pretty overwhelming. I can’t see a way of justifying either attending or buying fireworks that doesn’t conflict with my vegan values. Our three-year old is going to be pretty pleased to hear this. She’s off the hook and can stay at home in the warm and watch Despicable Me 2 for the 3000th time instead.

Having said all this, veganism is about doing whatever we can. Everyone’s boundary line is in a different place (and mine is constantly shifting the more I find out). So please don’t see this as some kind of guilt trip or judgement. I’m always learning, and I’m sure there’s plenty of stuff I still consume unwittingly that doesn’t strictly adhere to my values.

And if you’re having a fireworks party this weekend, we can still be friends. I probably just won’t be coming (not that you invited me anyway because I’m so hard to cater for). 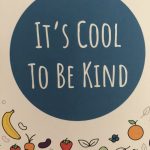