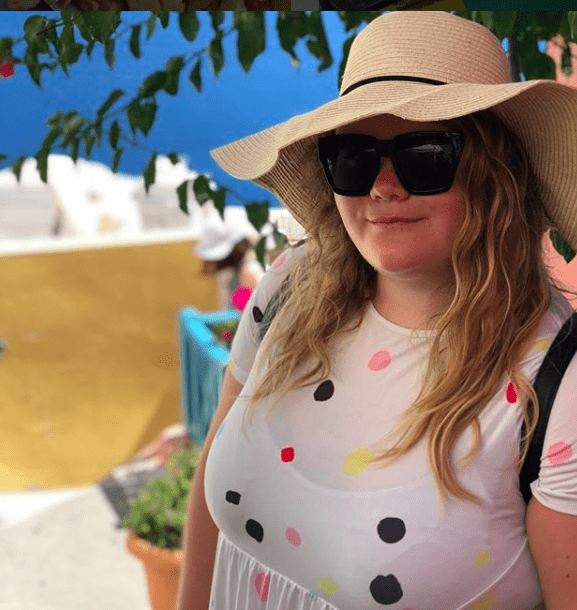 Hello! It feels like AGES since I’ve brought you one of these interviews, and I’m sad to say this is the last in the series….for now at least. Thanks so much to everybody who has taken part – it’s been an absolute joy sharing your stories.

For my final instalment, I interviewed the brilliant Amy Stuckey, who runs the Instagram page @allthingsveganuk.

I have been vegan for roughly 3 and a half years and I initially made the change because I gave up dairy due to an allergy and then went vegetarian. From there I became more aware of veganism and it really resonated with me, so here we are! If meaning someone else’s recipe then it would Niomi Smart’s chimichurri cauliflower steaks which is incredible although I’m often too lazy to cut the steaks and just roast the whole cauliflower!

I would love to meet Kalel! I think she’s awesome and a great asset to the vegan community.

My friends and family have been great since I turned vegan, although for my family it was a bit of an adjustment to begin with. My mum especially is amazing always sharing vegan recipes, buying in great food and making vegan friendly meals for me! I also had a couple of vegan friends before I made the transition so obviously they were supportive too. I’m also really lucky that I work for a very vegan friendly company where veganism is not considered weird and all the events have vegan options so I always feel included.

The most important person however would be my boyfriend who was adamant when I became vegan that he would never do so himself and he has now been vegan for mostly the same length of time I have! For him realizing that you didn’t miss out on your favorites made it a really easy change for him (: I love that our household has only vegan food in it and that we never have to feel uncomfortable due to others eating habits.

Tofu for ears!! Avocado nose would be so mushy and within seconds turn brown!

Probably my vegan wagon wheels that I made quite recently. I set myself a challenge to bake along with the bake off (#bakeoffbutvegan) and wagon wheels were the first challenge. I totally winged the recipe and definitely found it daunting as it included  homemade biscuits, jam and marshmallow (all vegan of course). I think they turned out really well, if a little messy! When you’re transitioning to veganism stick to the 90% rule. I find if you go too hard, too fast that you often fall off the wagon, become disheartened or feel like you’re missing out and being restricted. I find if you initially aim for 90% of veganism you’ll find out how easy you find it, and where you struggle. For instance say you really miss cheese so your vegan 90% with cheese being the thing that you are still eating, you know that finding a really good vegan cheese will help you reach that 100%
The 90% rule also allows for mistakes which inevitably happen when you’re transitioning, a pesky E number or you haven’t seen that the product contains honey! By knowing that you have an allowance for mistakes you don’t have to feel incredibly guilty, just learn for next time. With this rule I feel like you can comfortably assess how close you are to 100% veganism and how long it will take for you to achieve! Remember veganism is a journey and we are all in different places on that journey, and even if you only make a few initial changes that’s a few changes to the benefit of animals and the environment.

Usually for recipes or where I buy products from in order to create the food I have made!
Do you have any big plans for the next few months that we should look out for?

I have just relaunched my blog on my own website www.allthingsveganuk.com so there will be (hopefully) a lot more blog content! I have also set up a YouTube channel and want to transition to showing more recipe videos on there too! There is also one more exciting thing but I cannot currently talk about it but keep your eyes peeled!!

Want to read the whole Instavegan series? Click here to see all of my previous interviews.